Working with height and volcanic viewshaft restrictions of the Auckland Unitary Plan on a sub 400 sqm site, we were a little more creative than usual for this development. Rather than putting several apartments on top of each, we designed two smaller buildings, connected by a central spine and service staircase. The materials are a beautiful balance of dark folded metal cladding and timber around the openings and on the decks. The buildings face north so every apartment has a view of Mt Wellington to the west and a bit of a view out towards the water on the east. We’ve ended up with 5 apartments that sit comfortably beside each other in a central suburb close to amenities and transport.

For this development project, we were working with a relatively small section of just under 120 square metres. It is located in a convenient spot in central/eastern Auckland, within walking distance of a train station and bus routes. The land falls within the residential mixed housing urban zone, which encourages development.

Our client wanted to maximise the number of one-bedroom dwellings on the site while making them spacious and modern. Having already secured tenants set to move in, they wanted to expedite the building process as much as reasonably possible. The overall brief, then, was to design something modern, something to maximise the site’s potential, and something that wouldn’t take long to build.

The biggest challenge we faced was not the size of the section but rather the height restrictions imposed by the Auckland Unitary Plan. The land is located within the volcanic viewshaft of the Mt Wellington area, where the Plan stipulates that significant views of the volcanic cones must be protected. With this design, then, we had a height limit we couldn’t exceed and a restriction on the number of levels we could build. 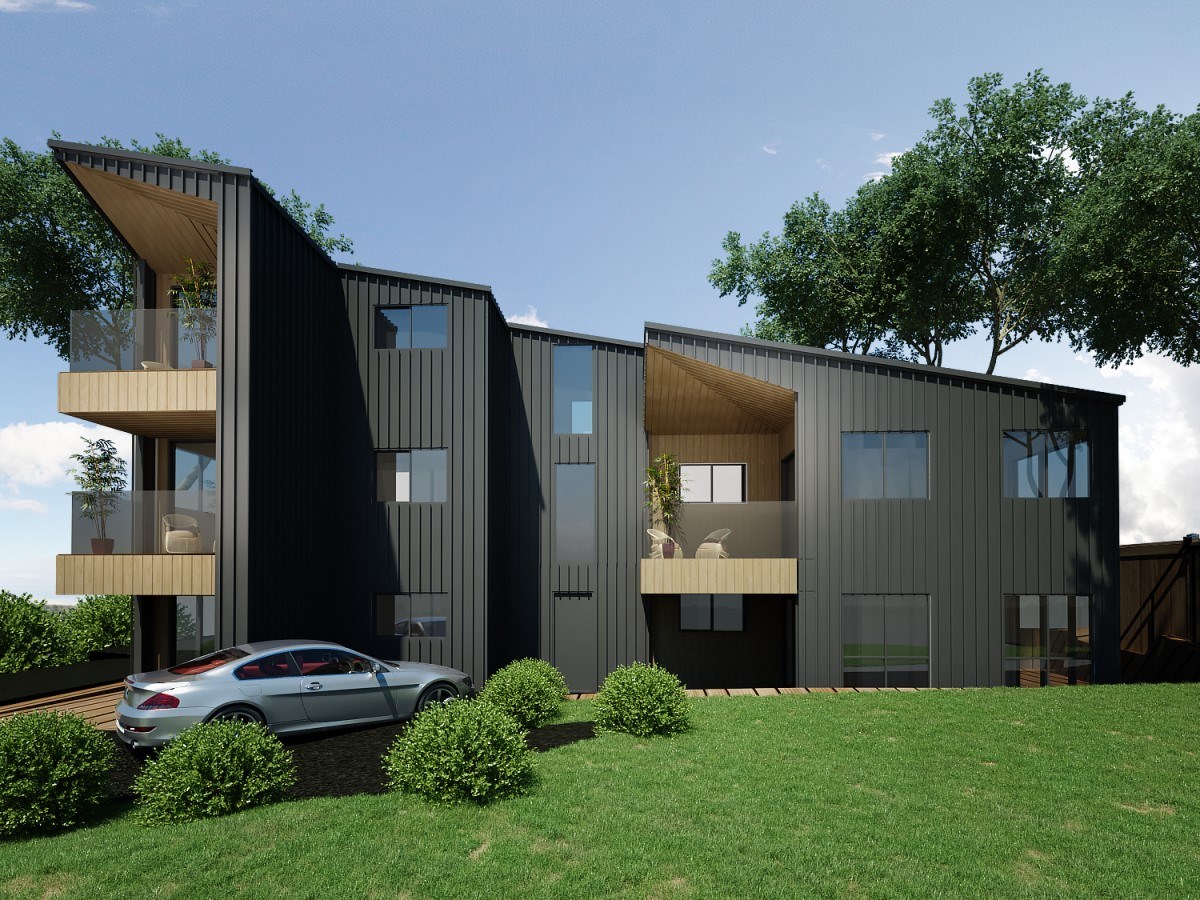 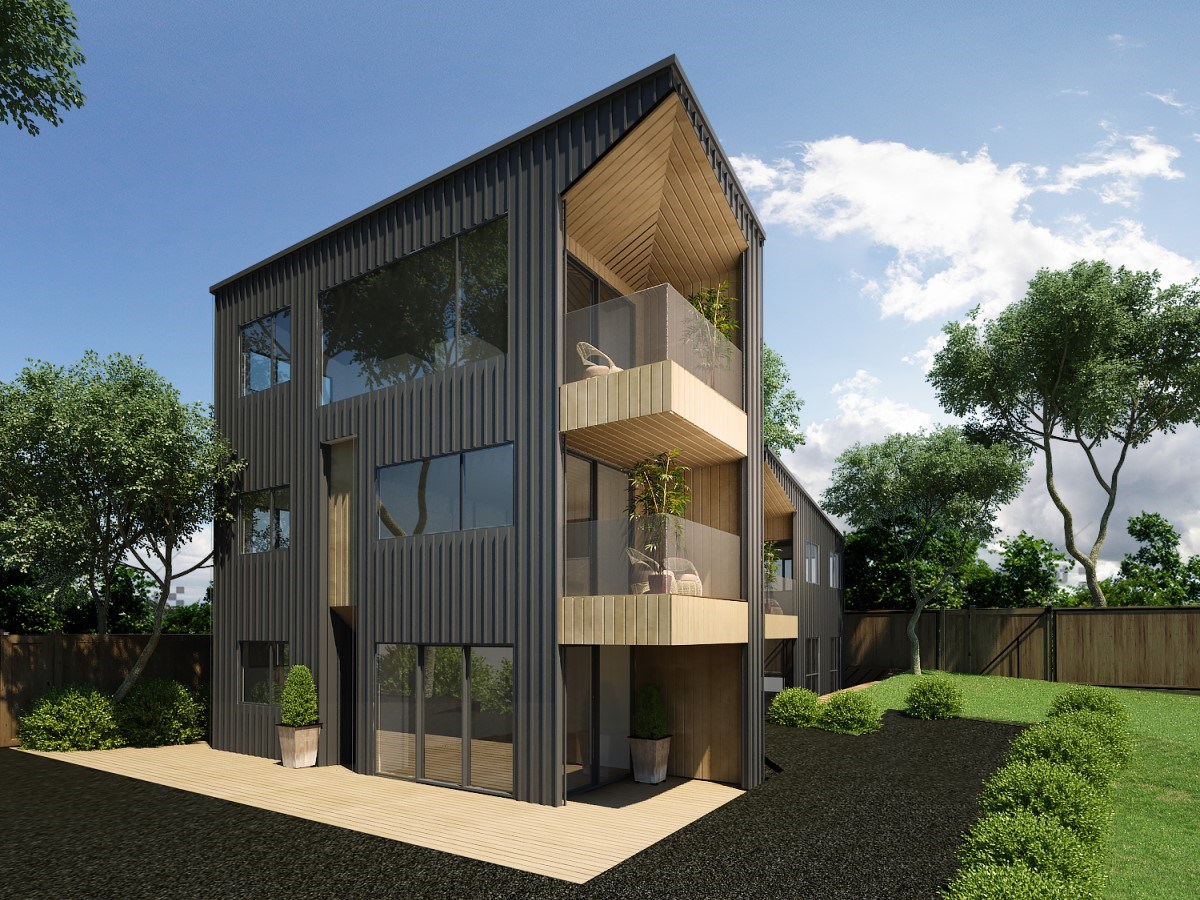 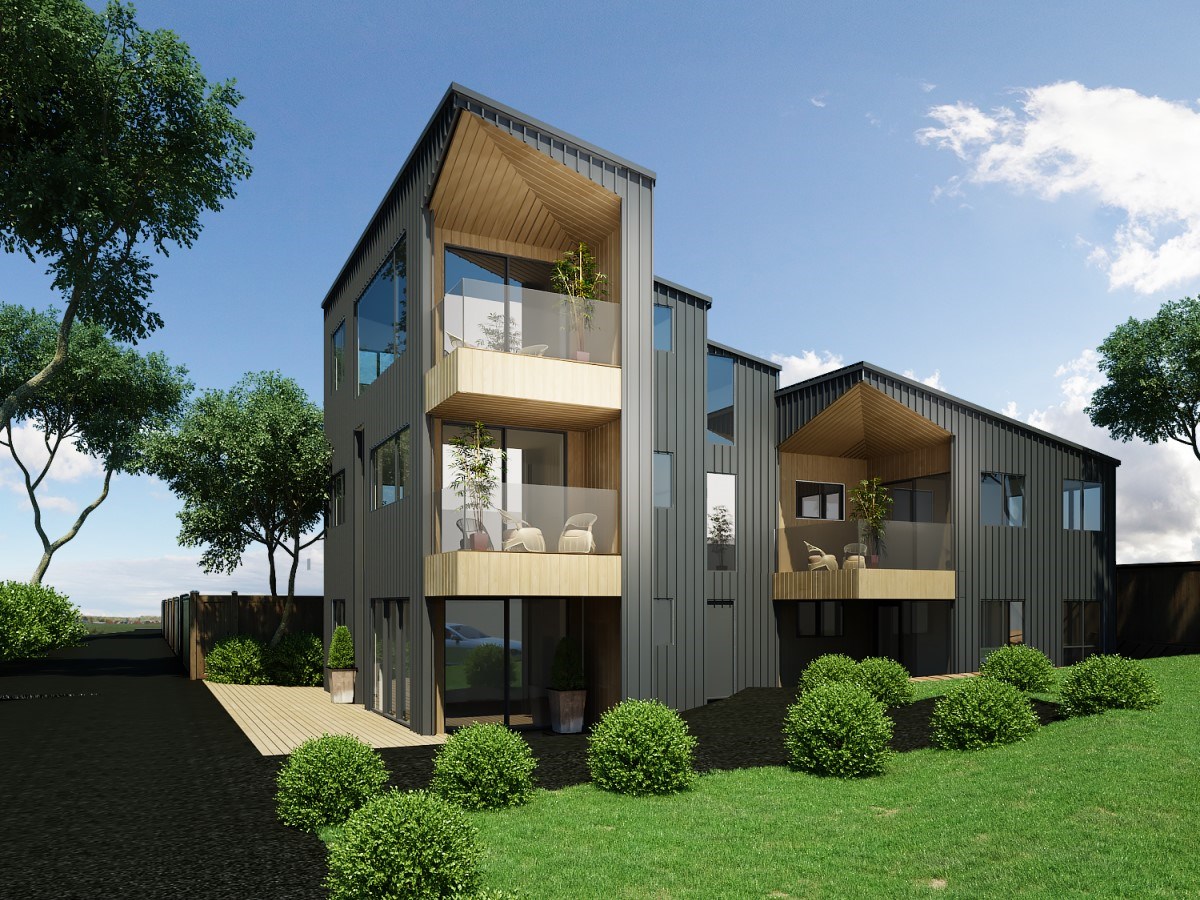 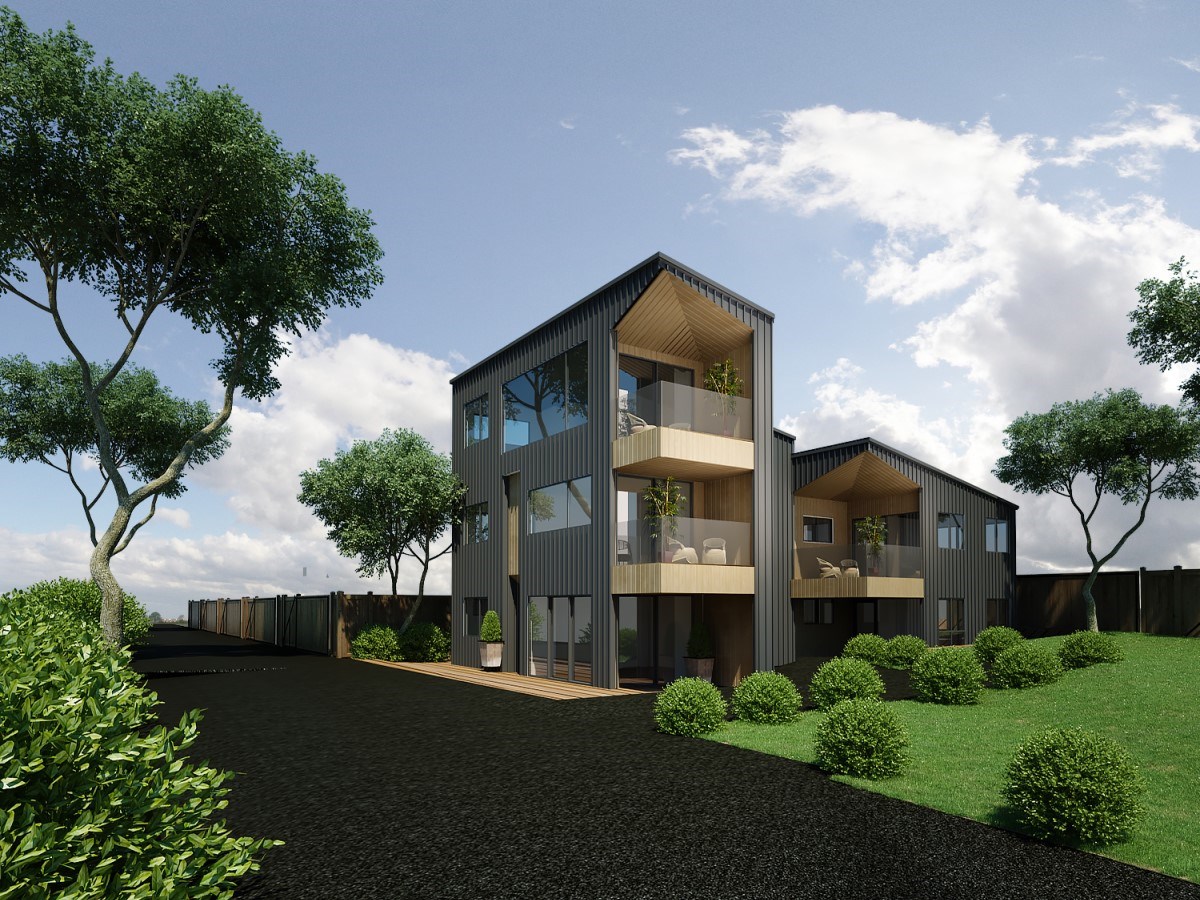 Rather than put several one-bedroom apartments on top of each other and go high, our solution was to build two smaller buildings, connected by a central spine and service staircase. We positioned the buildings to face north so that every apartment would have a view of Mt Wellington to the west and a bit of a view out towards the water on the east.

The building in the front consists of three levels, with a one-bedroom apartment on the ground floor and level one. The top floor, level two, has a studio apartment that looks north and receives sun all day.

Just behind this is a smaller building at the back that has two levels, with a generous one-bedroom unit on each level. In total, we have five walk-up apartments on the site. They each have their own outdoor living space – the upper units having balconies, while the two ground floor apartments have their own private gardens.

Rather than stick with boring straight lines that you see on many apartment developments, we added character by using sloped lines and a raised corner along the roof edge that faces west toward the mountain. This creates a sloped soffit on the upper levels that allows us to bring in as much light as possible into the apartments. The building itself looks like it’s rising out of the ground and pointing toward the volcanic cones. It was our way of adding a practical element to the design to allow for more sunlight, while also focussing the attention toward the natural elements that are such a key feature of this area.

We used a similar design idea to introduce a break in the façade along the road boundary. This makes it clear where the front doors to the ground floor apartments are and provides a visual connection to the street.

When it came time to select materials for this project, it was important to select colours and textures that would make this an attractive looking development while complementing the natural surroundings. It was also important that the materials would enable us to meet the client’s requirement for a quick building process.

On the exterior we used lightweight construction with folded metal cladding and vertical timber cladding. The timber is used around the doors, lining the deck, the façade around the decking, and on the walls that enclose the decking and the soffit. We intentionally used the timber as a contrast to break up the heaviness of the metal, adding warmth to the spaces people will occupy.

Because the client was interested in getting the development built quickly, with secured tenants waiting to move in, he inquired about the option of building off-site. We engaged with a building company that could do this and we were able to get a good estimate from our concept drawings.

We’re currently looking at options of having sections built off-site in a factory and being delivered to the site. This will significantly reduce the amount of time needed to build – early estimates suggest that this will speed the process up by several weeks. Another option being investigated is to have the ground floor apartments built on-site, while the upper floors are being built off-site in the factory. The only things we need to do on-site are establishing the below-ground services and having the concrete slab poured. With other stages of the build happening off-site, the factory construction components can be inspected and signed off in the factory, saving a lot of time for everyone involved.

At we write this, we are waiting for resource consent to be finalised, and then we can get straight into building consent documentation.

What we’re going to end up with here is a set of architecturally designed apartments that will be attractive to a range of tenants while providing maximum return on investment for the developer.

We’re combining uncomplicated structural design that allows for most of the building to happen off-site along with unique, clever details that give these buildings a unique character. We were guided by the landscape and used the restrictions of the volcanic viewshafts to inspire our design.