This gorgeous bungalow renovation is a perfect example of the merits of calling in professional help and a second opinion. Our clients here are a blended household with four children who live in the home fifty per cent of the time, so the family was looking for a better layout and more efficient use of space. As an interior designer, the client came to us with a few plans of her own and a couple of ideas of what she wanted to do to the house. That’s always a fun place to start from, and we love trying to incorporate a client’s ideas into the new designs.

The first requirement was to improve the layout of the house so that it could work better for a family of six, while also being comfortable for the couple themselves when they don’t have the kids at home. When a client comes to us with this type of request, we always like to get clear on exactly what’s not working with the current layout, and then come up with a few solutions for how to fix it.

In this case, the home had been added to and renovated a bit over time, so there was no smooth flow between the spaces. There was a very large room that served as a lounge, but it was actually too large for one room. The clients had a few ideas of how that room might be converted into a more useable living room with a dining area.

The other problem that the owners had been frustratingly putting up with for years was that the laundry was in a shed out back. With four children, you can imagine how much laundry gets done in this family and how inconvenient it was not having the laundry inside the house.

The third request was to stage out the renovations. They suspected that layout changes might be expensive and were considering making the changes in a few phases to spread the costs out. 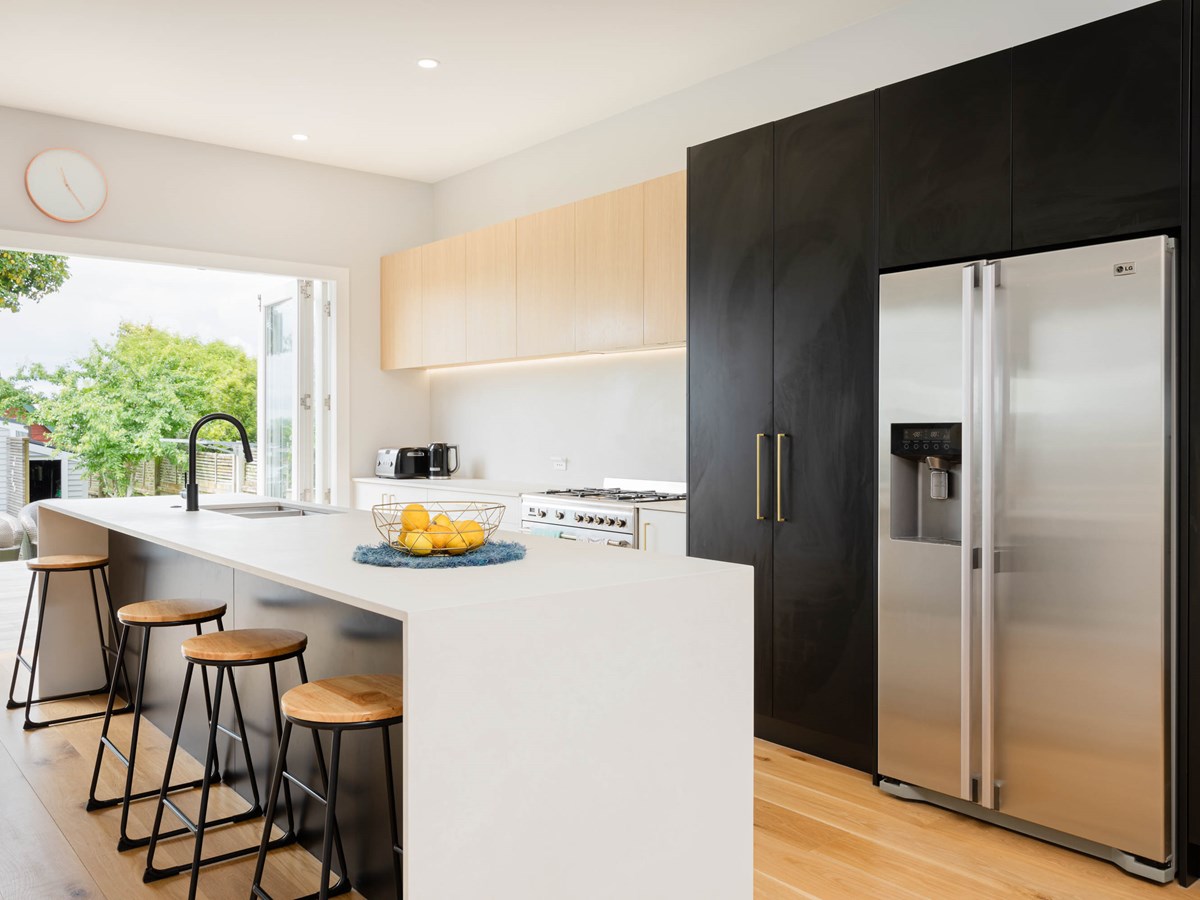 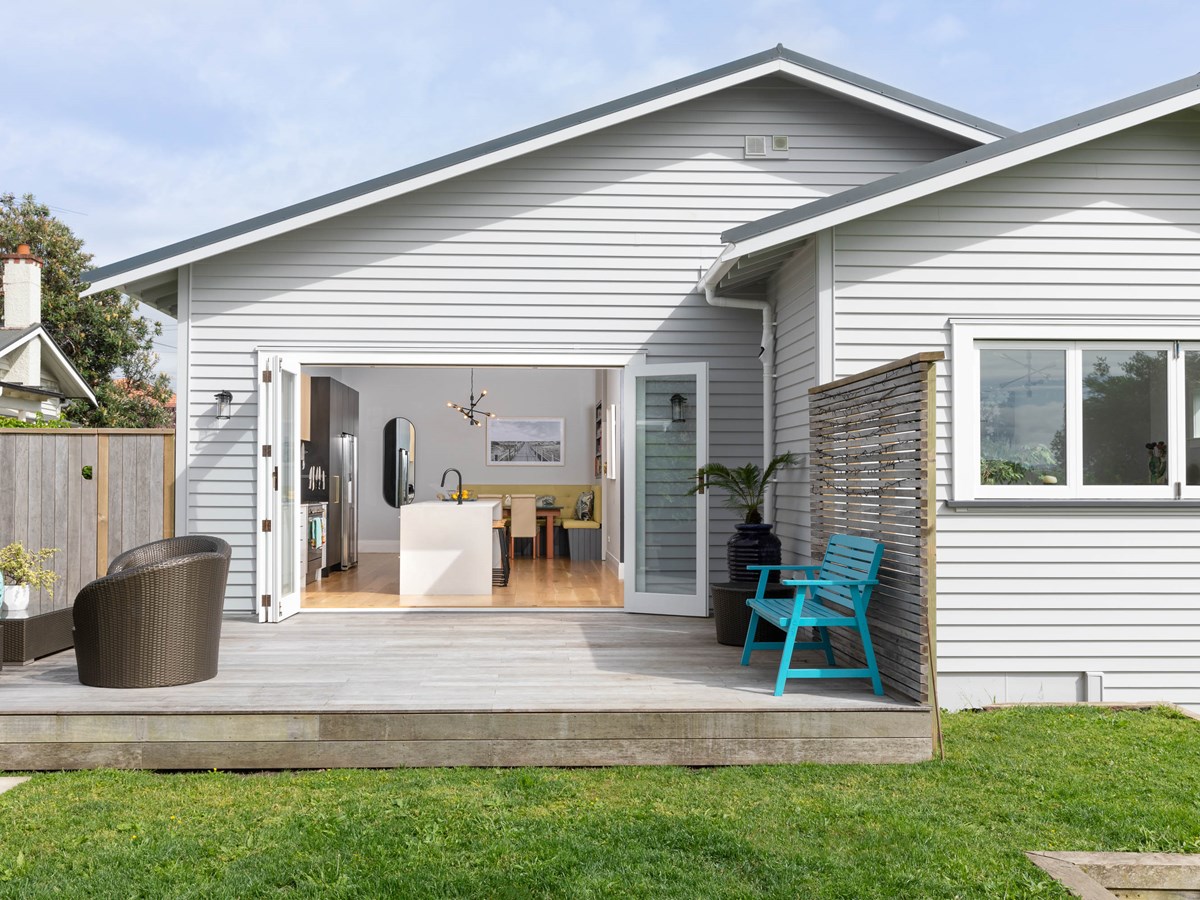 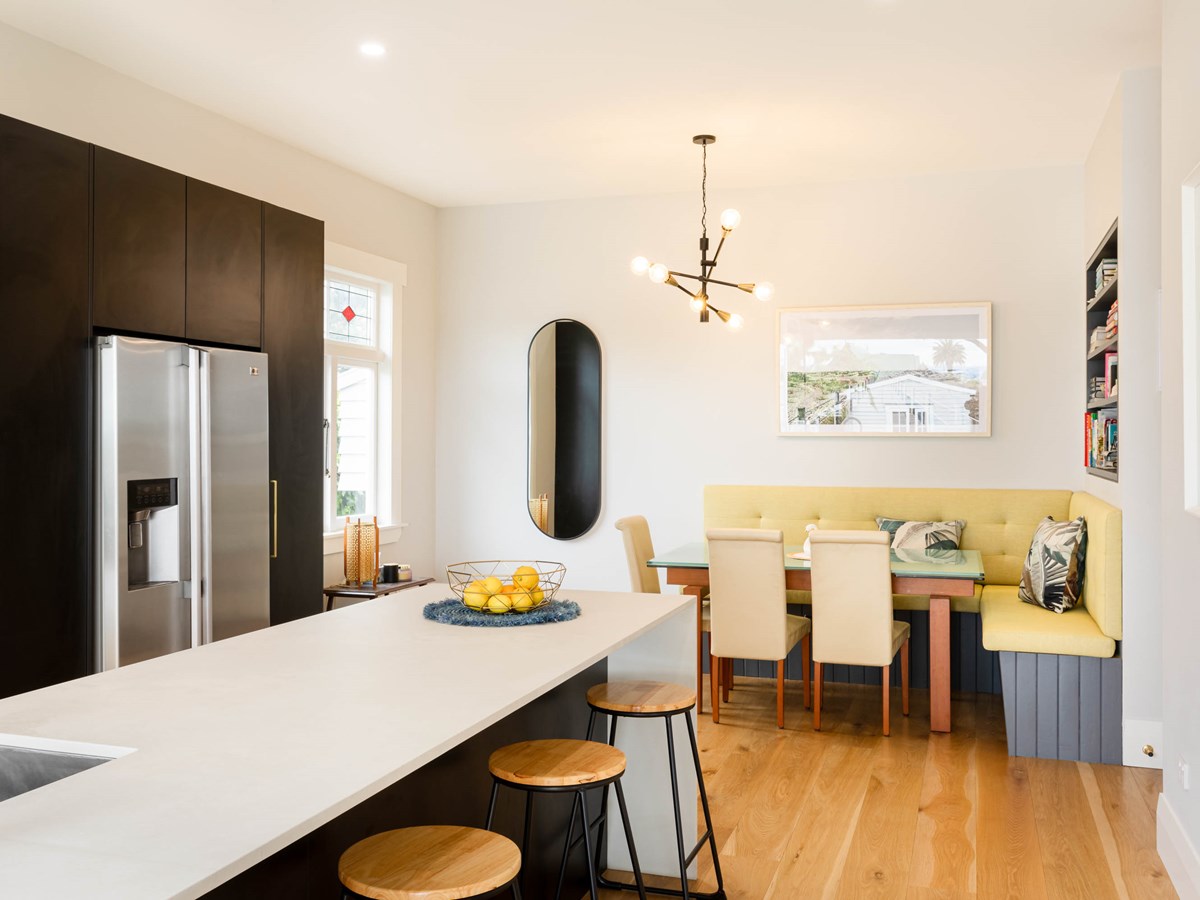 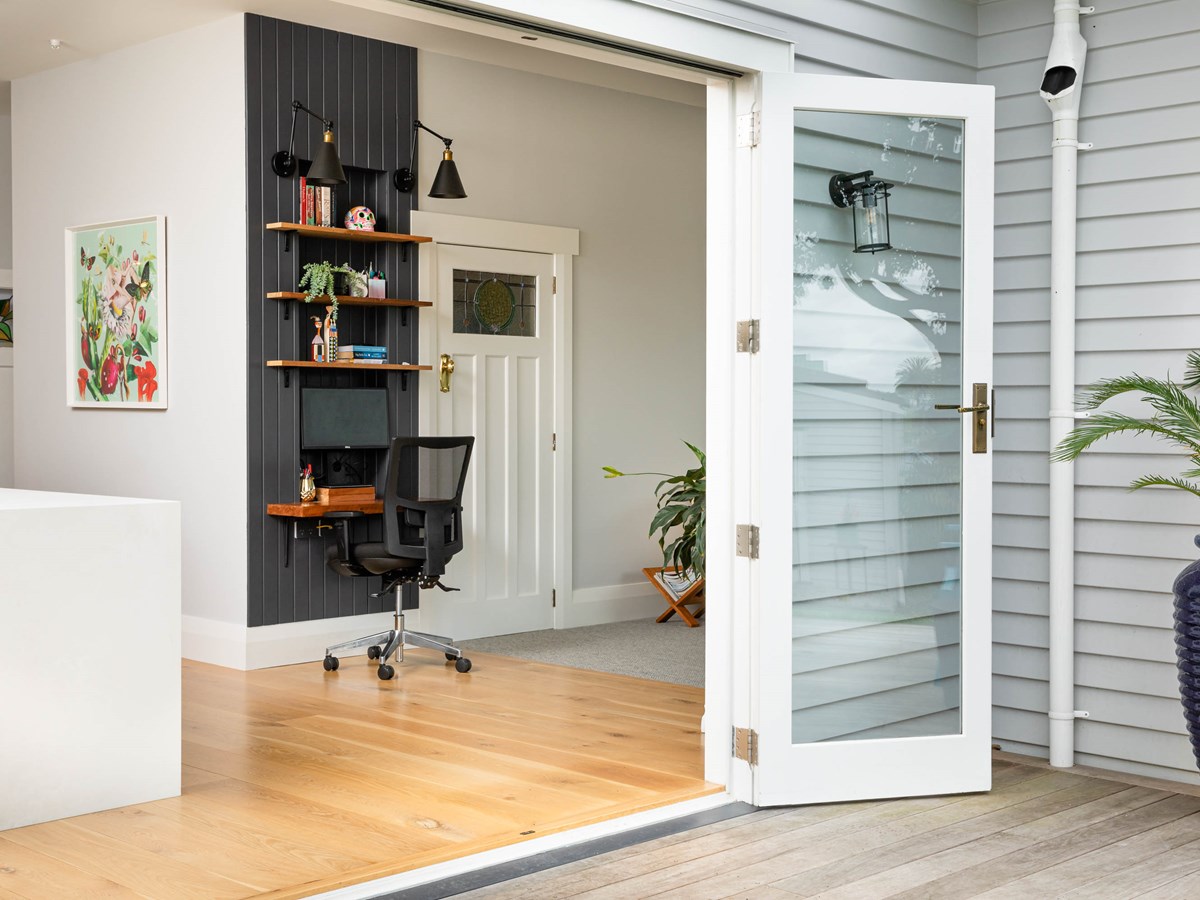 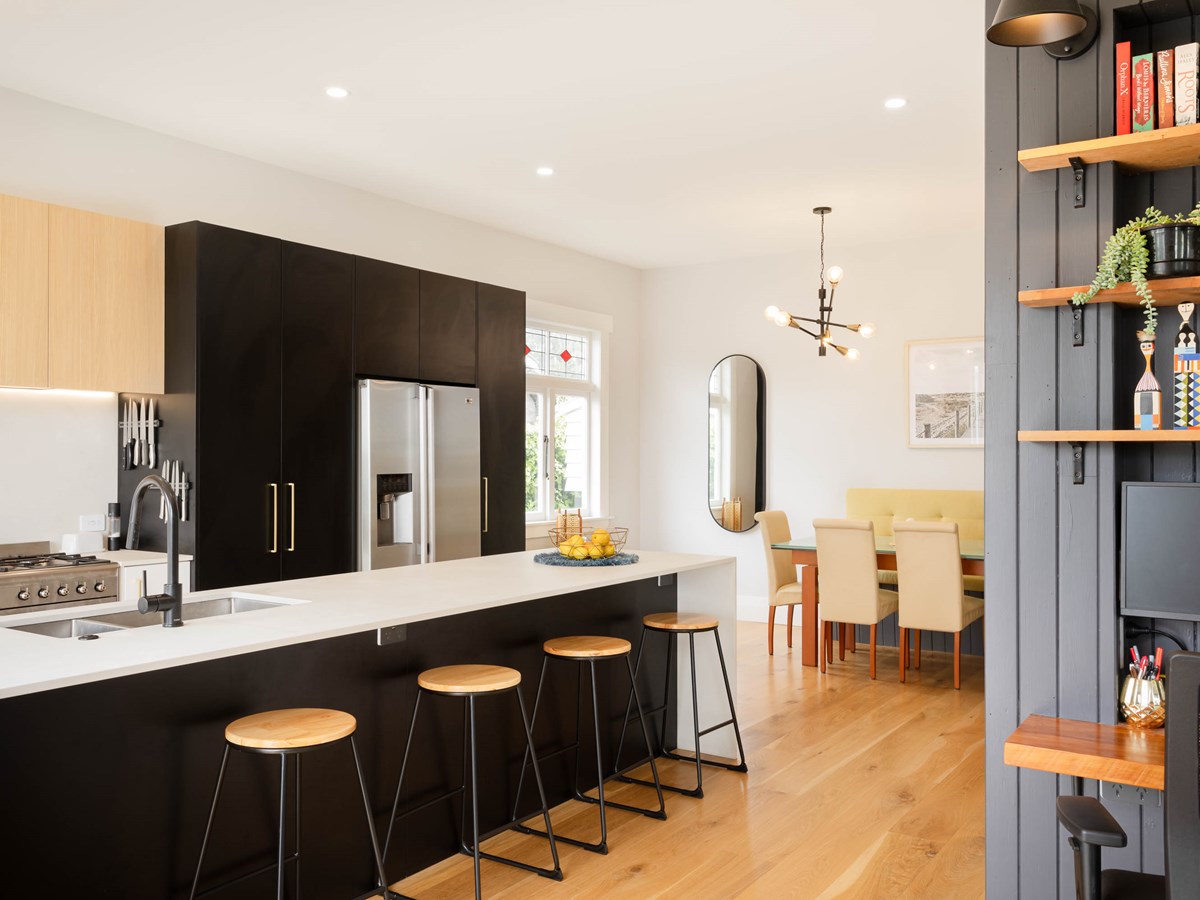 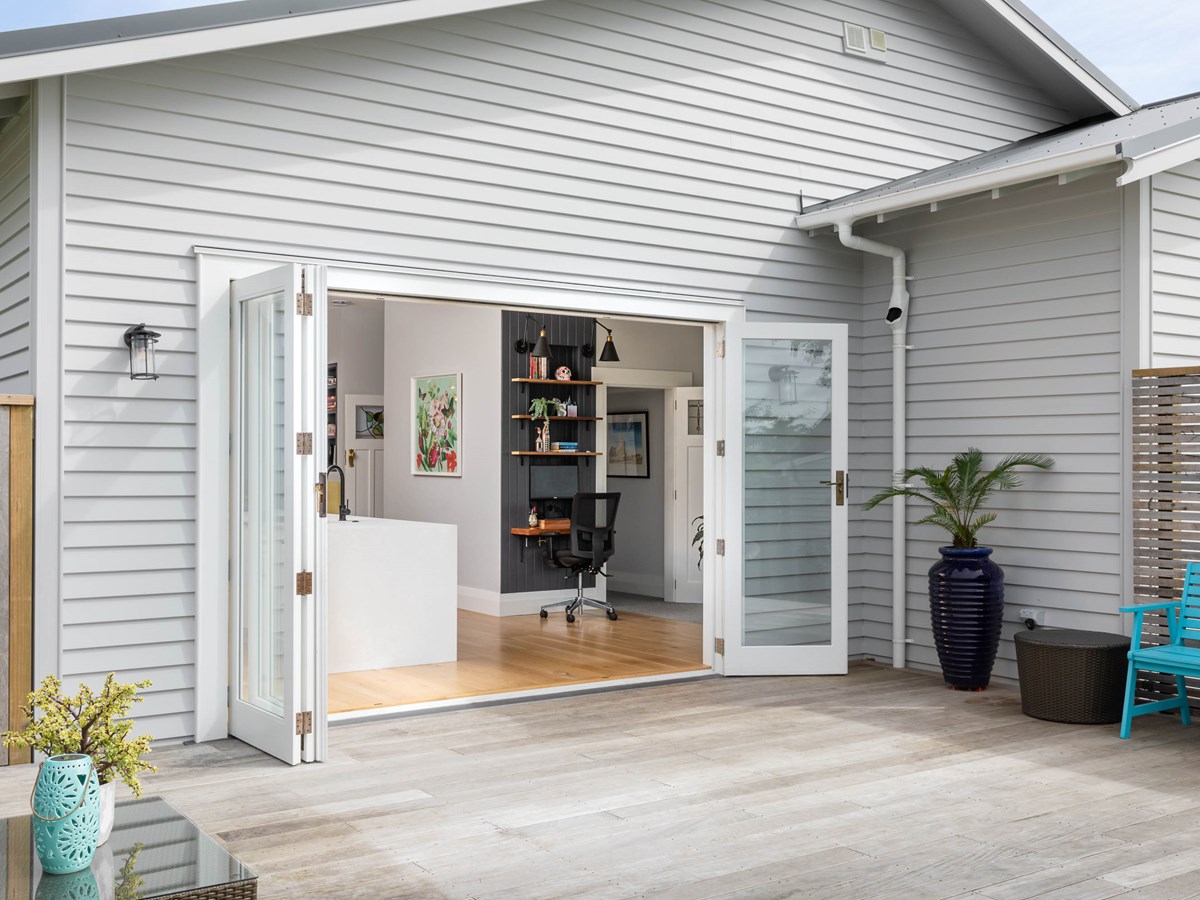 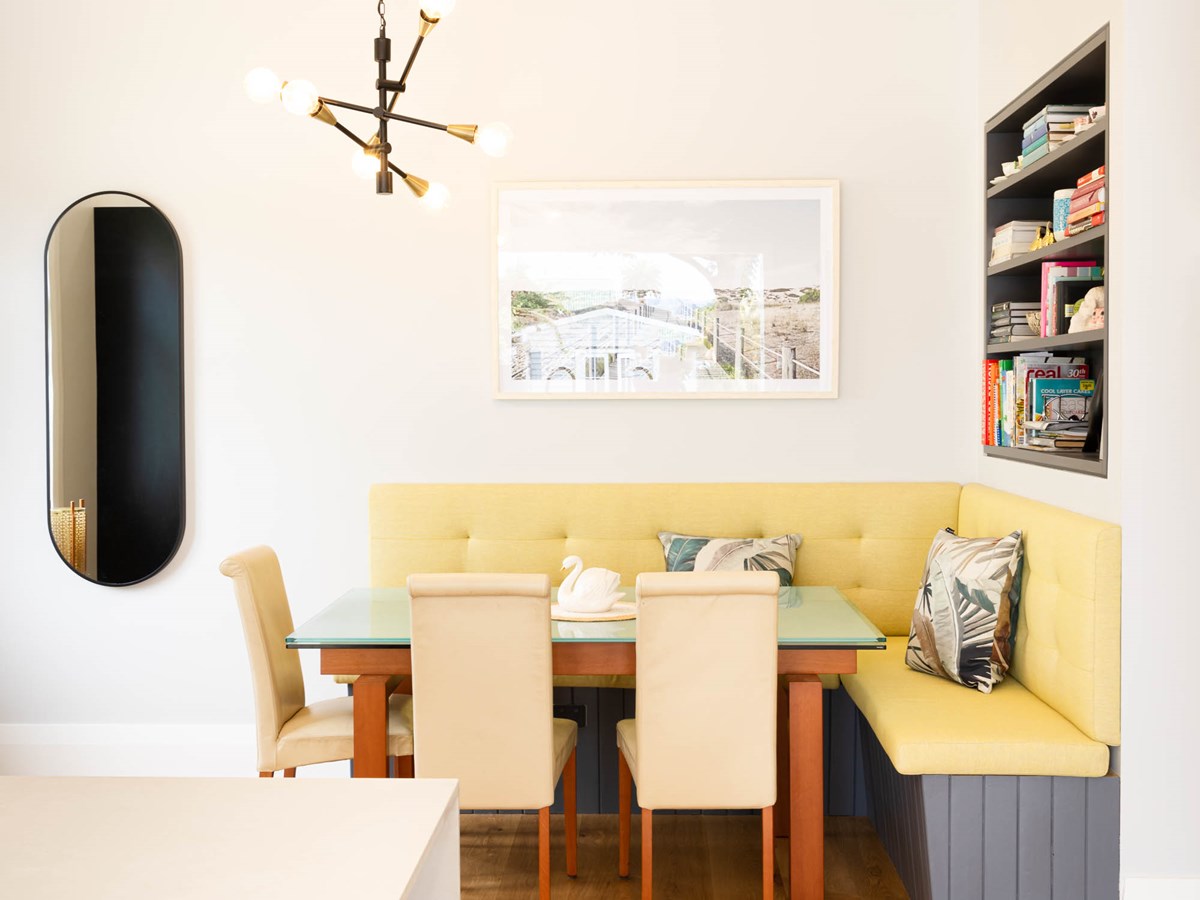 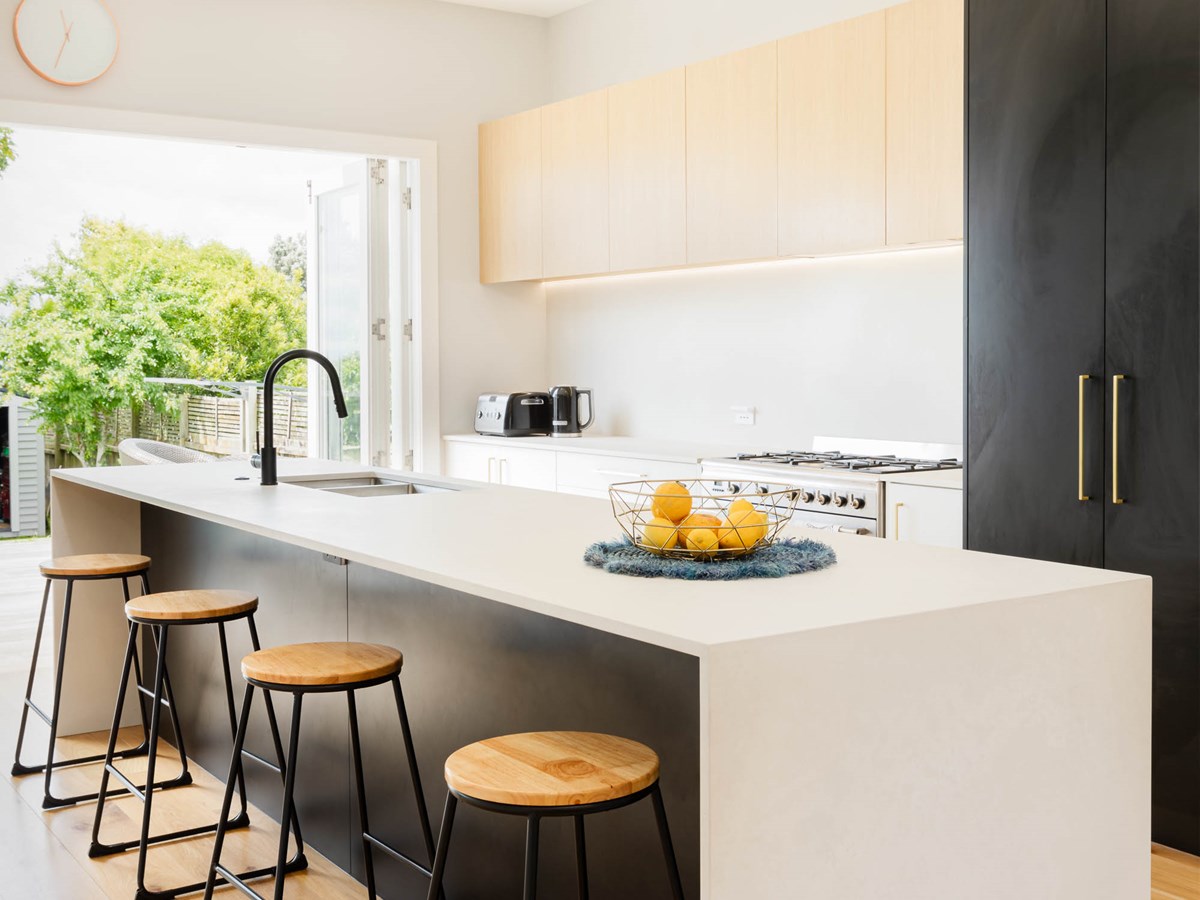 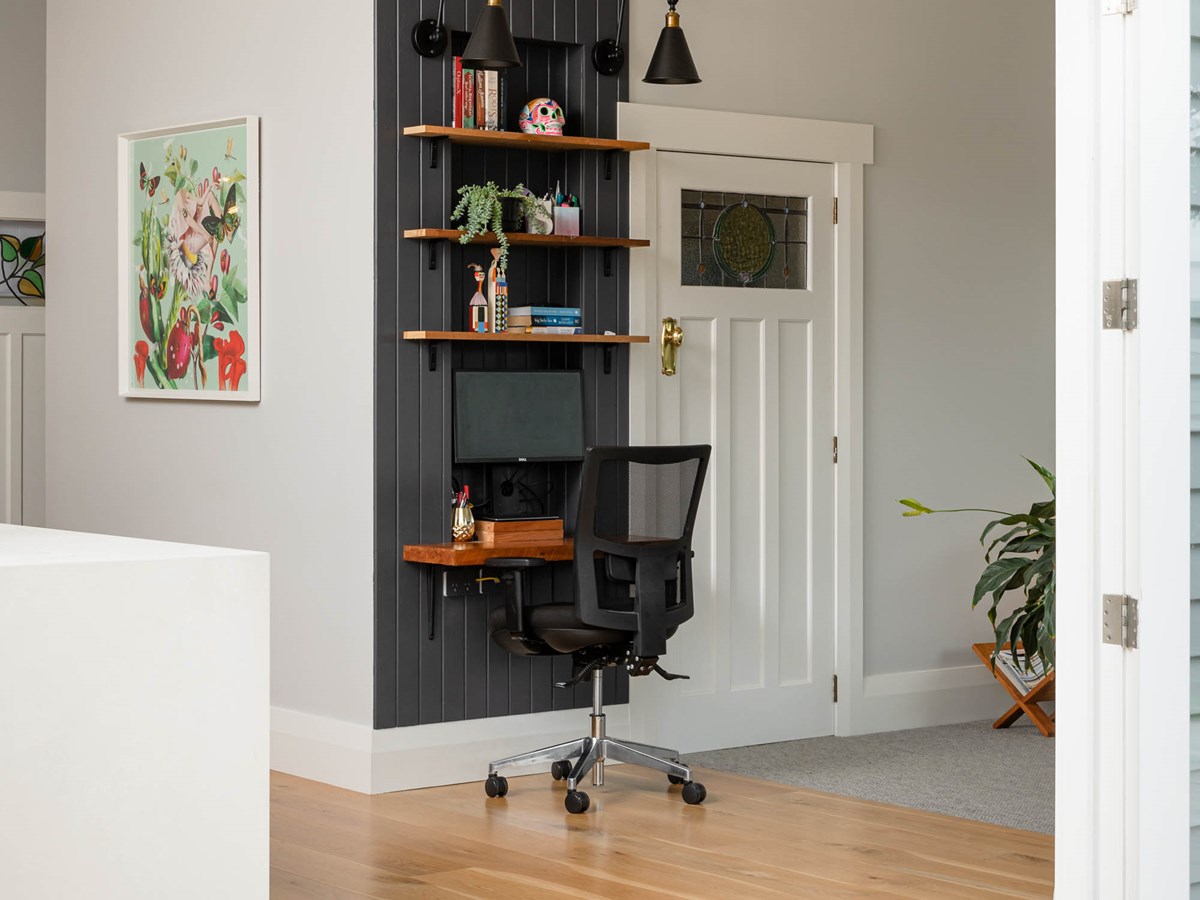 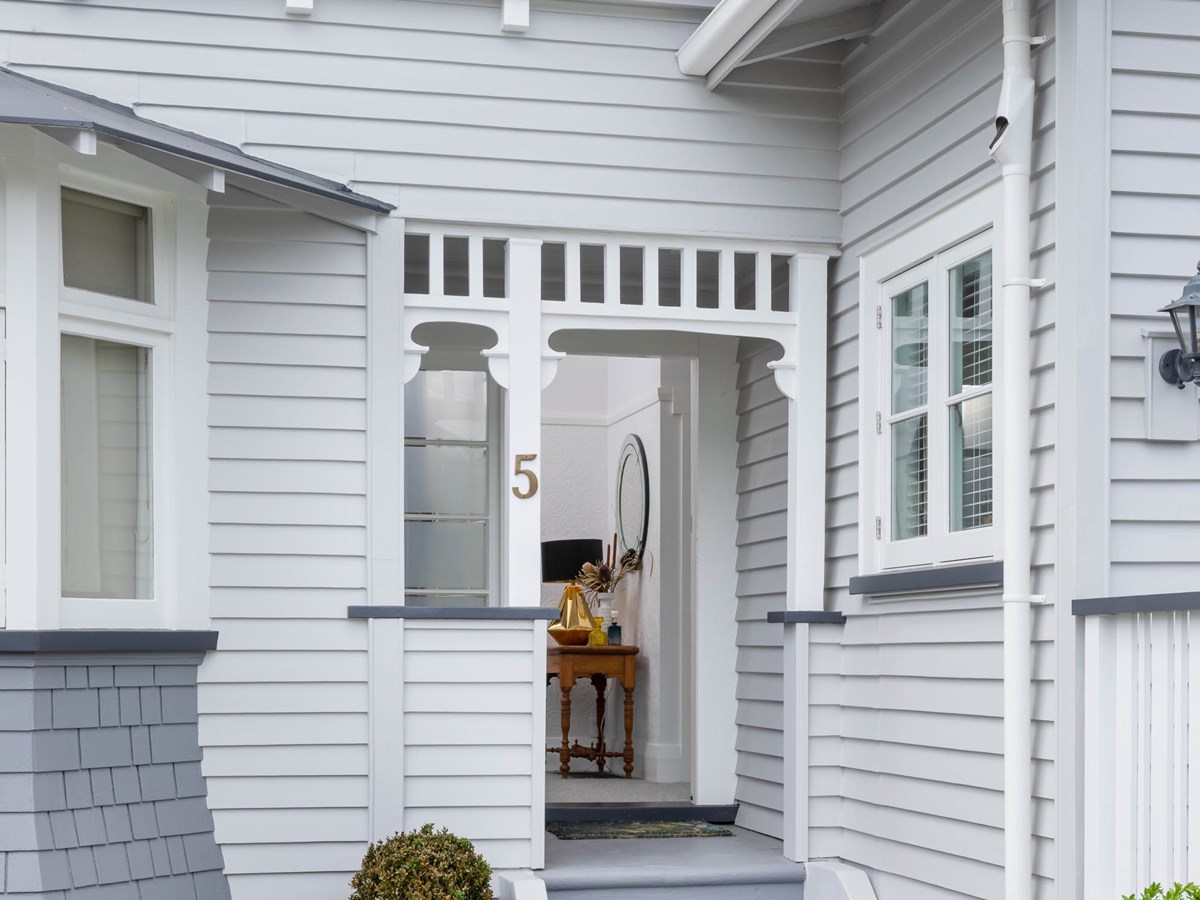 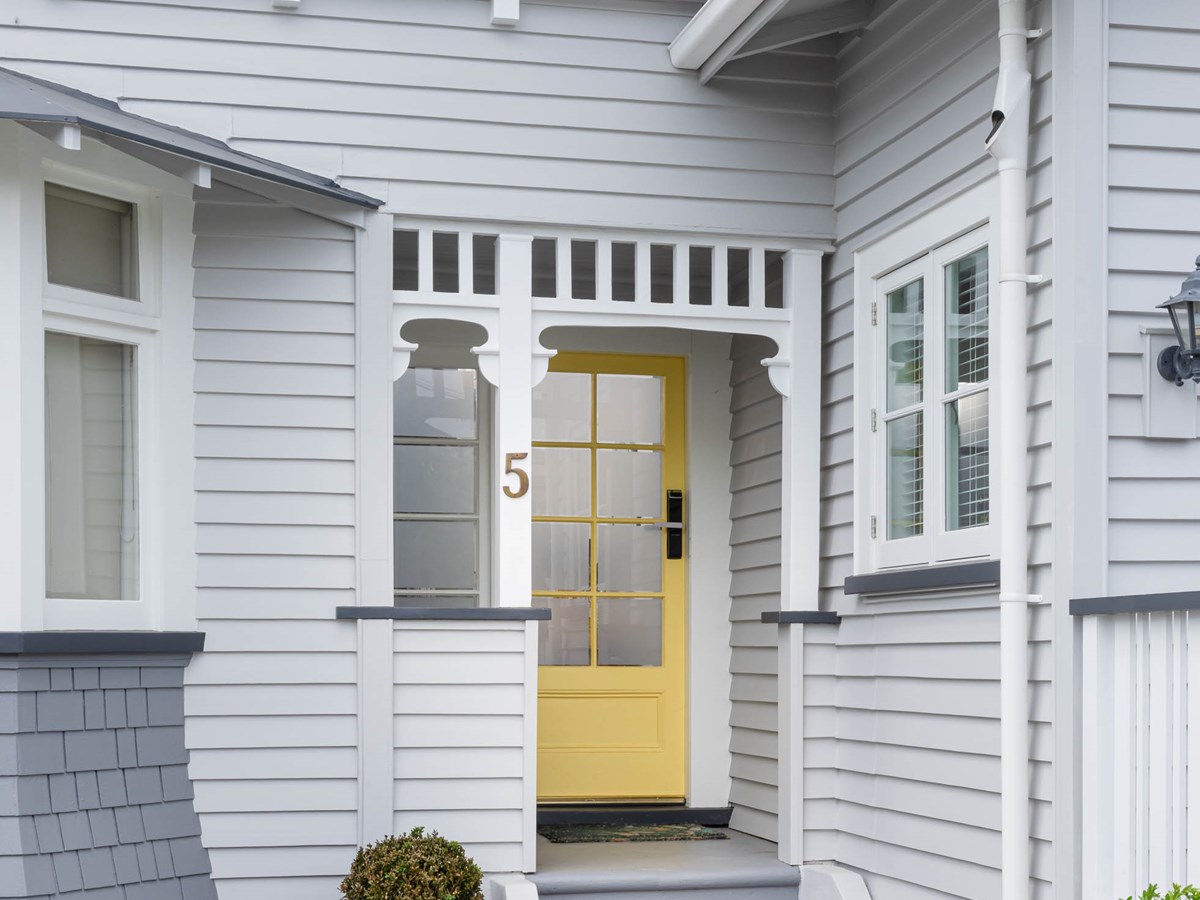 There were some gorgeous heritage-style elements in the home already, and it has a large, sunny section out back. What was lacking, however, was the flow that’s needed as soon as you open the front door to pull you in and through to the back garden.

The original house was built in the traditional bungalow style with a central hallway and bedrooms on the left. On the right was that large living area that was the main problem we needed to fix and work around. And it was facing the road instead of the spacious back section and deck.
So rather than reconfigure that room itself as stage one, as the owners originally had planned, we presented a few design ideas that involved moving the living space to the back of the house and then creating flow from that out to the back garden. There was a sloped ceiling kitchen at the back of the house which felt quite disjointed and closed off from the rest of the house. This needed to be incorporated better.

Having moved that old bathroom, we opened up the back wall and reconfigured the rear of the house to create a seamless flow between the kitchen, dining and living areas. Large bi-fold doors at one end of the kitchen open up to the deck and back garden, making the most of views out to the garden and creating that indoor-outdoor flow that we Kiwis love.

The new modern kitchen fits a long island bench that is large enough for all six to sit at if they want. There is also a custom-made, built-in soft seating bench in the dining area. We cleverly used the space between the kitchen and living room and added a small work nook that can be used by children studying or someone working from home.

Every space in the home has been well thought out and designed with intention. We even managed to incorporate the laundry into the home, as desired. Because they already had a wide hallway with a beautiful high-stud ceiling, we found space to add a laundry hub with storage tucked away on the side of the hallway. It’s hidden behind sliding doors, so you don’t even know it’s there.

We removed the lean-to outside and tidied up the roofline, extending the large gable and adding another smaller gable for the extension. Everything now sits cleanly under one roof, looking like the newer sections of the house have always been there rather than patchy add-ons.

The old laundry shed is still there, but it too has had a bit of a facelift. It now serves as the wife’s home office, as she runs her own business from home. In the future, it can be converted into a teen chill-out zone if they want, but for now, it has turned out to be quite a lifesaver with people working and studying from home over the past year and a half. (Note, this renovation was completed the day before Auckland went into a level 4 lockdown in March 2020.)

This beautiful bungalow has been brought back to life with spaces that work for this family and a smooth flow from one area of the house to the next. The kids each have their own bedroom, with enough bathrooms to share, and a kitchen and dining area that invites everyone to gather together to reconnect. The decision to complete the renovation work in one stage, rather than doing one or two rooms at a time, was a fantastic one. The project turned out to make more economic sense doing all the work at once, and the family could enjoy an almost brand new home at the end of one stage of building work. In the end, we were extremely fortunate with our timings – had our clients delayed any stages of the renovations, they would have been affected by lockdown work restrictions as well as an increase in the costs of materials.

One of our mantras is, do it right and do it once. We definitely saw the benefits of that approach here.